Provocation and interruption are, respectively, the origin and goal of philosophy. This sense of philosophy finds expression in the following quotations from Peter Sloterdijk, the first of which suggests that philosophy is a trace of an unavoidable provocation, while the second articulates the function of the philosopher as an interrupter.

It is a characteristic of humanitas that human beings are confronted with problems that are too difficult for them and that nevertheless cannot be left unaddressed on account of their difficulty. This provocation of the human being by something that can be neither avoided nor mastered left an unforgettable trace behind already at the beginning of European philosophy—indeed, perhaps philosophy itself is this trace in the broadest sense.
(Sloterdijk, “Rules for the Human Park,” Not Saved: Essays After Heidegger [Polity Press, 2017], p. 211)

We live constantly in collective fields of excitation; this cannot be changed so long as we are social beings. The input of stress inevitably enters me; thoughts are not free, each of us can divine them. They come from the newspaper and wind up returning to the newspaper. My sovereignty, if it exists, can only appear by my letting the integrated impulsion die in me or, should this fail, by my retransmitting it in a totally metamorphosed, verified, filtered, or recoded form. It serves nothing to contest it: I am free only to the extent that I interrupt escalations and that I am able to immunize myself against infections of opinion. Precisely this continues to be the philosopher’s mission in society, if I may express myself in such pathetic terms. His missions is to show that a subject can be an interrupted, not merely a channel that allows thematic epidemics and waves of excitation to flow through it. The classics express this with the term ‘pondering.’ With this concept, ethics and energetics enter into contact: as a bearer of a philosophical function, I have neither the right nor the desire to be either a conductor in a stress-semantic chain or the automaton of an ethical imperative.
(Sloterdijk, Neither Sun nor Death [Semiotext(e), 2011], p. 84-5) 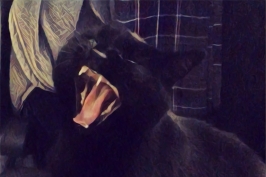