In Plato’s seventh letter (341c), he says that what he pursues in his studies cannot be expressed in words, but emerges through sustained communion with “the thing itself” (to pragma auto) and “is brought to birth in the soul on a sudden, as light that is kindled by a leaping spark, and thereafter it nourishes itself.” There is always a call for a return to the thing itself. Contemplation feeds on an alimentary fire. Thinking is alchemy.

We can debate the specific character of the thing itself. Is it an elemental prima materia? Maybe it’s a more practical matter, as in the pragma of pragmatism. Could it be Kant’s Ding an sich? Maybe these things are less like the noumenal objects of transcendental idealism and more like die Sachen selbst of transcendental phenomenology, the things Husserl found rupturing the phenomenal/noumenal distinction, irrupting within the intentional fabric of the lifeworld? Or are they more like the actual entities of Whitehead’s ontological principle, or the actants of actor-network theory?  The point in this passage of Plato’s letter is that whatever knowledge we have of to pragma auto isn’t found in words but in the sparks that ignite through commiserating with the thing itself. Words, stories, and histories of knowledge can only be understood in the light of these sparks. Moreover, this relationship between words and an alimentary fire is not unique to Platonic endeavors in philosophical inquiry. It is something that philosophy inherits from the mythic and ritualistic traditions in and against which philosophers articulate their love of wisdom. The relationship between the flame and the word is a religious trope. Consider an example from Jewish mysticism.

Gershom Scholem closes the lecture series that became Major Trends in Jewish Mysticism (New York: Schocken Books, 1961) with a Hasidic tale that touches on the history of Hasidism, conveying something about the relationship between the words that make up its history, its story, and the fire that ignites and nourishes it.

When the Baal Shem had a difficult task before him, he would go to a certain place in the woods, light a fire and meditate in prayer—and what he had set out to perform was done. When a generation later the “Maggid” of Meseritz was faced with the same task he would go [to] the same place in the woods and say: We can no longer light the fire, but we can still speak the prayers—and what he wanted done became reality. Again a generation later Rabbi Moshe Leib of Sassov had to perform this task. And he too went into the woods and said: We can no longer light a fire, nor do we know the secret meditations belonging to the prayer, but we do know the place in the woods to which it all belongs—and that must be sufficient; and sufficient it was. But when another generation had passed and Rabbi Israel of Rishin was called upon to perform the task, he sat down on his golden chair in his castle and said: We cannot light the fire, we cannot speak the prayers, we do not know the place, but we can tell the story of how it was done. And, the story-teller adds, the story which he told had the same effect as the actions of the other three. (p. 349-50)

This story could be interpreted as an account of the decline of a tradition, a loss of experience until only mere words remain. However, it can also be interpreted as an account of a transformation of the mystery of the original fire into words, such that the inflammatory mystery lives in and as the tale. Giorgio Agamben explores this in The Fire and the Tale (Stanford University Press, 2017).

Living the paradox of a task that Scholem shares with Walter Benjamin, a task of “transforming philology into a mystical discipline,” means this: the work of seeking the mystery, which disappears when discussed historically, can only be accomplished through the historical analysis of philology (6). How do we articulate a history of that immemorial mystery which disappears in all historical analysis? Bewilderment is necessary.

But like the Grail that was lost in history, the researcher must lose himself in his philological quête, because this very bewilderment is the only guarantee of the seriousness of a method, which is to the same extent a mystical experience.
If investigating history and telling a story are, in all truth, the same gesture, then the writer faces a paradoxical task. He will have to intransigently believe only in literature—that is, in the loss of the fire. He will have to forget himself in the story that he weaves around his characters, and yet, even if only at this price, he will have to know how to discern at the end of this oblivion the fragments of black light that come from the lost mystery. […] Literary genres are the sores that the oblivion of the mystery has inflicted on language. […] The fire and the tale, the mystery and the story are the two indispensable elements of literature. But in what way can one of the elements, whose presence is the irrefutable proof of the loss of the other, bear witness to this absence, exorcising its shadow and memory? Where there is the tale, the fire is out; where there is the mystery, there cannot be the story. (6-8)

Thinking, recalling the immemorial fire, requires an ascetic practice that produces a work and transforms the subject. It requires alchemy.

To think means to recall the blank page while we write or read. To think—but also to read—means to recall matter. […] That is, writing is part of an ascetic practice in which the production of work becomes secondary with respect to the transformation of the subject who writes. (108-9)

A field in which the work on oneself and the production of a work are eminently presented as consubstantial and indivisible is alchemy. The opus alchymicum in fact implies that the transformation of metals occurs hand in hand with the transformation of the subject, that the search for and production of the philosopher’s stone coincides with the spiritual creation or recreation of the subject that carries it out. (121-22)

The great work (magnum opus) of alchemy, the work of producing the lapis philosophorum, is nothing other than the aporetic task that Foucault describes as care of the self, cultivating the aesthetics of existence, living life like a work of art. “The care of the self necessarily passes through an opus; it inextricably implies an alchemy” (134).

The real alchemist is rather the one who—in the opus and through the opus—contemplates only the potentiality that produced it. […] Certainly, the contemplation of a potentiality can only be given in an opus; but, in contemplation, the opus is deactivated and made inoperative and, in this way, given back to possibility, opened to a new possible use. A truly poetic form of life is the one that contemplates in its opus its own potentiality to do and not to do, and finds peace in it. (137) 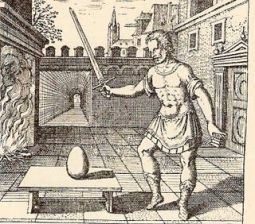